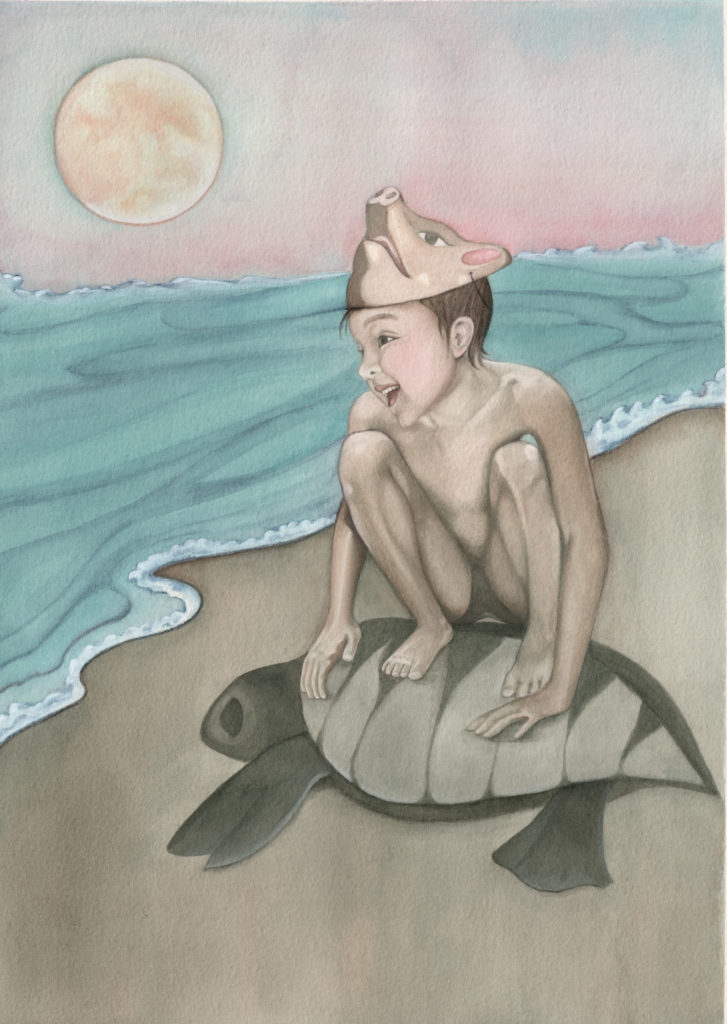 Back in the 70s, babies / toddlers weren’t given glasses and their eyes weren’t tested. So in hindsight, I think I was pretty myopic as a toddler. I drew tiny circles in one of my dad’s rare books when I was two. He didn’t believe a two year old was capable of such a thing and blamed the housekeeper. My myopia has continued to shape me and my perceptions. I have a tendency to focus on the details, and to lose sight of the bigger picture. Ironically, in my 40s, I started losing my close vision as well. So now I’m adjusting to a world that is blurry regardless of distance. Now, I will have to learn to see without seeing.

I finally had my eyes tested for school and it became clear that I needed glasses. So begins the march of bad glasses. From the age of five, my eyes were hidden away behind huge bottle-cap lenses, inside plastic 70s, then 80s frames. It’s ironic that those styles came back into fashion in the late noughties. I wear that style now.

I also developed a lazy eye, called in ‘squint’ in the UK. My right eye would wander back and forth, looking for something to settle on, something to see. I imagine it was disconcerting. I imagine it made me look a little crazy. I had an operation on my eyes at 6. I remember counting backwards from ten, then waking up in the hospital with both of my eyes patched. I was blind for my time in there. I can’t remember how long it was.

What follows is my strongest memory from childhood. The catalyst of my story, the thread that binds my journey together. I was taken to the playroom everyday. There were toys, there were other children, there were books. And I remember forming very clear pictures of what everything looked like. So when my father came to pick me up from hospital, I insisted we visited the playroom first, now that my eyes were patch free. Now that I could see. Well, sort of see. Everything did look like a reflection in a fun-house mirror as my eyes and brain tried to communicate with each other like two drunken sailors.

So, we get to the playroom and…I’m horrified. NOTHING looks like I had imagined. Nothing looks like it was supposed to. And everything seemed darker, plainer, and well…less interesting.

“What’s wrong with the turtle?” I asked.

“What do you mean?” my father responded.

“It doesn’t look right” I said. “this isn’t the same turtle.”

My father grabbed an orderly.

“Is there another toy turtle?” he asked.

“Not that I know of” said the orderly.

That’s when I first realized that the real world kind of sucked. And my imaginary world was glorious. So I started to hang out there, in my head, as much as I could.

I read book after book after book. I begged my parents to finally get a TV. We didn’t have one, which of course made us nerds and weird. Now, I kind of agree with my parents decision not to. So I listened to story records instead, which was a thing in the 70s. I made dolls out of corn husks. Yes, we still did that in the 70s too. And I road my green Schwinn bicycle deep into the wide expanse of prairie that surrounded our house. Because the prairie was so empty and desolate, I pretended I was the last person on earth. I played with my doll house and made various deals with God. Of course he never kept up his end of the bargains… I wasn’t necessarily happy, but I wasn’t unhappy either. In general, I was dissatisfied with the world, and in many respects, I still aim. The world doesn’t look or act like I imagine it should or it could. I had a choice. I could either escape into my fantasies permanently. And trust me, that is so tempting. Or I could try and find some beauty in the real word with all of its injustice and unfairness, its scarcity and inequality, and of course its stupid mosquitoes.