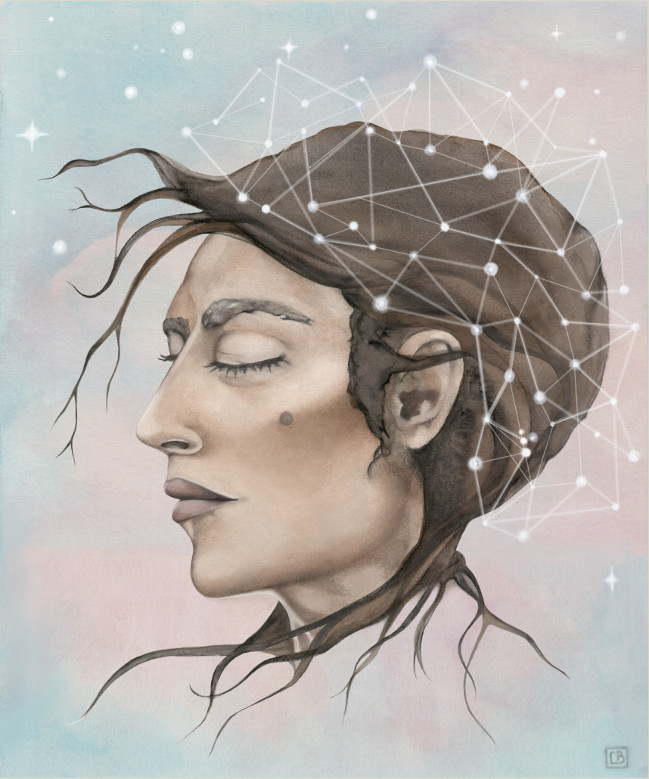 This is the creative process for my ‘Intuition’ card. Firstly, I wanted to do something that depicted the way the brain fires in rapid patterns. I think this is how intuition works in a way. The brain fires so quickly, it seems like an idea or a solution to a problem comes from the big blue, but in actual fact, pieces of it have been floating around in your brain for a while. It’s just a matter of making the connections.

This lead to the idea to use a crown of stars to show this process. Each star represents a thought node and the lines between are the pathways that form between thoughts.

My lovely colleague / friend, Reshma Gajjar offered to model. I went through her instagram feed and used a variety of photos and videos to familiarize myself with the contours of her face. Then I created the initial sketch.

After that, I painted the mid-tones and the shadows. I used diluted acrylic on water-color paper.

For the creative deck, I often use cheaper, light weight paper that is very smooth, so the paint dries incredibly fast. A variety of techniques can be used to create a smoother finish, but in my opinion, I wasn’t entirely successful here.

Next, I scanned in the original and added a background that I had painted previously. I also fixed a few mistakes, smoothed out some of the harsher lines and darkened the shadow along the jaw.

Finally, I added the brain/star map using an airbrush in  Mypaint.  I have a drawing monitor with a pressure sensitive pen that works well for this.

Next Article
Compasso Coaching is Live! >>