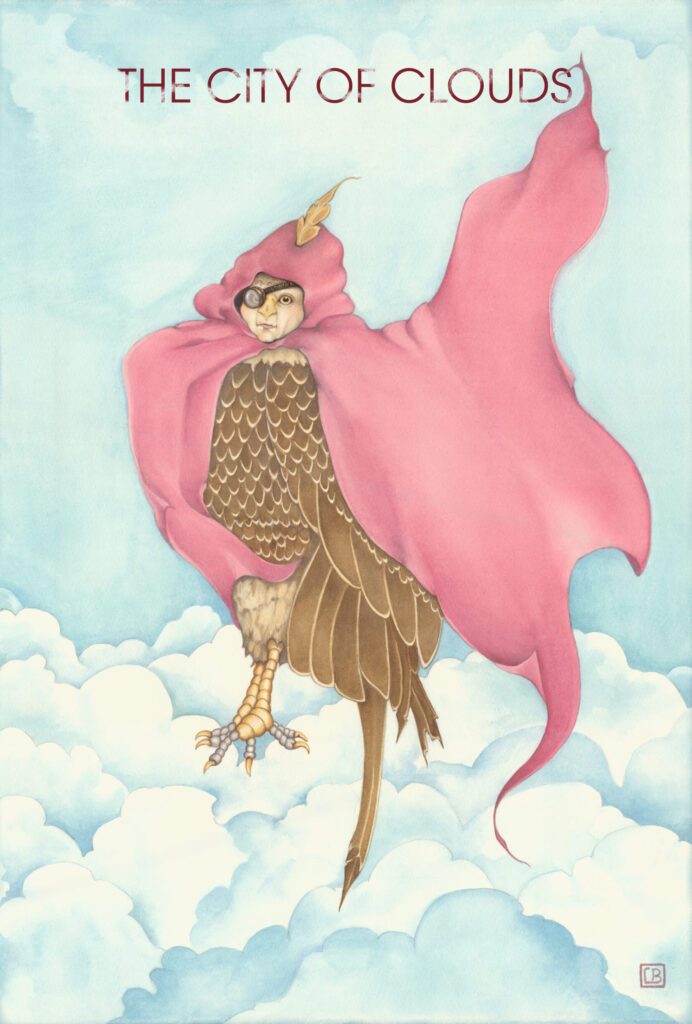 SYNOPSIS
May is obsessed with flight. Her favorite bed-time story is a history book about the Wright Brothers, and she can fold an origami airplane in the blink of an eye. Quick to escape into her imagination whenever the real world becomes too hard or too uncomfortable; May’s head, and her heart, are often in the clouds.

So when May wakes up in mid-air, floating above her bed, she figures she must be dreaming. Especially when a ghostly image of her missing father suddenly appears and asks for help. But when she realizes her newfound ability is most definitely real, she sets out on a quest to find her father and bring him home.

On the way, May meets CRICKSHAW, a shifty, and surprisingly chatty bird. Since May’s flying abilities are unpolished – more like flailing and falling than flying – the bird offers to help May improve her skills. Of course, May isn’t entirely sure that she can trust this strange bird, but his help is essential if she has any hope of reaching THE CITY OF CLOUDS, a magical, floating city and the place where May’s father is being held captive.

The city also harbors the lost souls of passengers and pilots from vanished flights. Like May’s father, the souls have been imprisoned by KEOCAW, the Queen of the city and the last of a species of bird-like creatures. Keocaw rules over the empty and desolate city in a fog of bitterness and grief, hoping that her species survived the choking black smog that rose up from the human cities below, and that one day they will return.

Desperate to keep the city afloat, Keocaw controls the trapped souls with an iron grip, promising them freedom if they agree to peddle the winged bicycles that generate the city’s power.

During her quest, May is transformed into a bird/human hybrid by a magical feather and flies towards the city with Crickshaw as her guide. But the pair are separated en route, and May must explore the city alone. Soon, she encounters the Queen’s henchmen, white puff-balls armed with lightening bolts that can take on the form of any object, and is also reunited with Crickshaw. But as they near the palace, May can’t shake the feeling that she’s been here before…

Unsure whether her father is alive or dead, or whether Crickshaw is friend or foe; May must evade capture and free the lost souls, before she can challenge Keokaw, rescue her father and ultimately find her way home.

Previous Article:
<< The Creativity Workbook for Coaches and Creatives OUT NOW!